Do You Need a Survey?

Purchasers need to do their own inspection.

It is certainly true that most residential purchasers in our Puget Sound area do not require a real property lawyer. Real estate brokers are well trained to use very refined standard Purchase and Sale Agreement forms. The standard of care of escrow agents is very high. Limited Practice Officers employed by escrow agents are licensed by the Washington State Bar Ass’n and well trained how to select and prepare typical real estate documents, such as the deed. Residential lenders are highly regulated with Federal and State statutes requiring fair disclosures. None of those professionals are able to provide legal advice to a purchaser to assist their evaluation of the legal rights of the property owner and neighbors with respect to the boundaries, easement rights and burdens, or enforceability of covenants or restrictions.

It is very rare in our area for parties to a residential home sale to hire a surveyor. Sometimes the Purchaser needs to know before constructing new improvements. Usually an inspection is adequate to disclose possible issues adequately for a Purchaser’s needs.

Before we discuss how to inspect, we need to discuss why inspection of the land is so important.

The title report is limited in its disclosure about title matters. The title company does not inspect the land. The primary reason is that the title insurance policy provides almost no coverage that the boundary improvements are on the legal description boundary.

The title company only reports about recorded documents. Like an iceberg, only a portion of title matters are recorded and visible. The purpose of an inspection is for the purchaser to look for unrecorded matters that are legally enforceable rights to ownership and rights to use land as easements. Washington real property law gives priority to the actual possession and use on the land. Actual use can win against the descriptions in the recorded documents. Actual use can win when nothing is recorded.

But look on Schedule B General Exceptions on the “title report,” which is the Commitment for Title Insurance, for these standard coverage exceptions from coverage:

What do those words mean?

(1). A claim of a “party in possession” is any type of interest in the land that the person now using that land might say if you had asked. The law says the purchaser is subject to whatever unrecorded rights that occupant might claim.

(2). A claim of a right of easement can be based upon a use upon the land that a neighbor has used without permission for a period of at least ten years. Such easements are legally enforceable against a purchaser because their use is apparent upon inspection.

Two examples of easement claims based upon use by a neighbor:

Without a survey, a purchaser will not know if the boundary improvements, such as fences and rockeries, are on the legal boundary line. Very often, the improvements constructed by prior owners of the property are actually over the boundary, which are called “encroachments.”

If a survey had been done, it would discover an encroachment because the surveyor must locate all improvements and where they are with respect to the invisible line of the legal description on the recorded deeds.

(4). Mechanic’s Liens are lien rights that are given to those who perform work or provide materials upon real property. An inspection upon the property should disclose work done within the past 90 days. Many title companies remove this standard coverage exception for Homeowner’s policies. A purchaser that is assuming this risk should look for recent improvements, such as a new roof, new cabinets, a new furnace, and should ensure the seller pays for that work.

The title insurance policy with those standard coverage exceptions will not protect against loss due to these unrecorded matters, so the purchaser should carefully inspect the property looking for these title issues that are disclosed by the inspection of the actual uses by the owners of the property on both sides of boundaries.

The Homeowner’s Policy of Title Insurance provides limited, but valuable protection against some consequences related to encroachments. If you have that Homeowner’s coverage, it is less valuable to pay for a survey.

The Covered Risks of the Homeowner’s Policy include these three protections:

There is an important exception to the protection of any form of title insurance policy. This is important for a Purchaser to know about.

Paragraph 4 of Exclusions from Coverage:

In addition to the Exceptions in Schedule B, You are not insured against loss, costs, attorneys’ fees, and expenses resulting from: … 4. Risks: … b. that are Known to You at the Policy Date, but not to Us, unless they are recorded in the Public Records at the Policy Date;

If you discover a title problem that is not a recorded matter, you should disclose it to the title company! If you don’t, you will have no protection. If you do disclose it to the title company, they might add it as a Special Exception so you get no coverage for that matter. Often the title company will assume that risk, especially if that issue has existed for more than ten years based upon adverse possession principles. More likely than not, you will not know. Disclosure is not required if you do not know. During an inspection, I rarely know where the survey boundaries are. I often suspect there are boundary improvements that are encroaching, one side or the other, but I don’t know.

What if you hire a surveyor? One consequence is that you will know there are encroachments and you will be obligated to disclose to the title company. Usually they will add a special exception and remove all coverage. You can often persuade the title company to assume the limited coverage of the Homeowner’s Policy if that has existed for more than ten years.

Example of an Inspection

Last week I performed an inspection that revealed boundary landscaping that appeared not to be on the boundary line, and I believe the house was encroaching into the area that was supposed to be the access road. I also concluded that the neighbor’s road was encroaching onto the property, not where it was supposed to be located. However, I concluded there was no need for a survey to determine where the invisible lines were on the dirt. 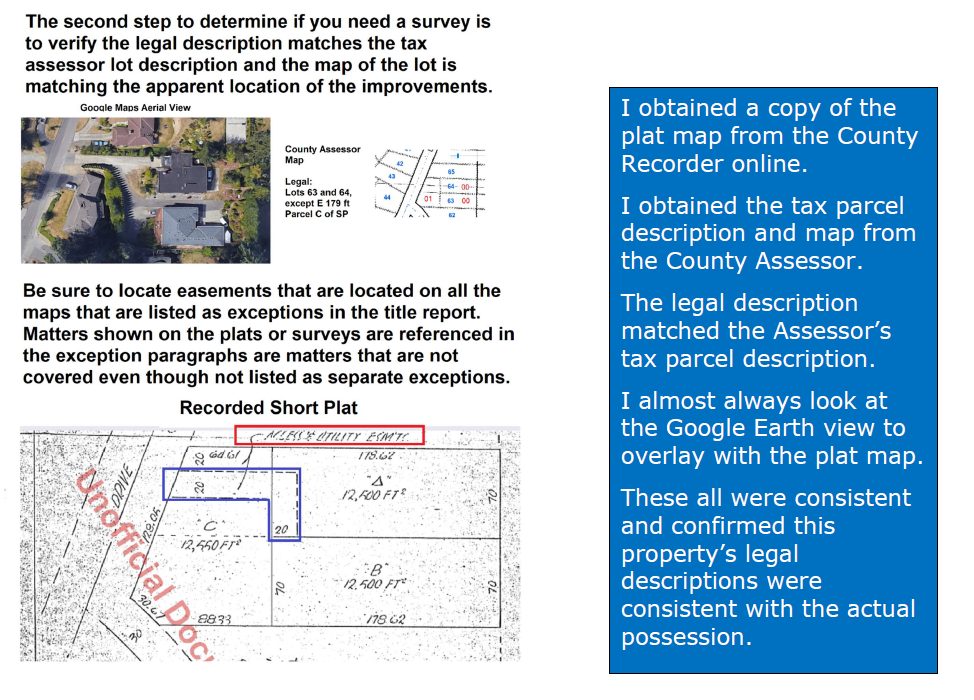 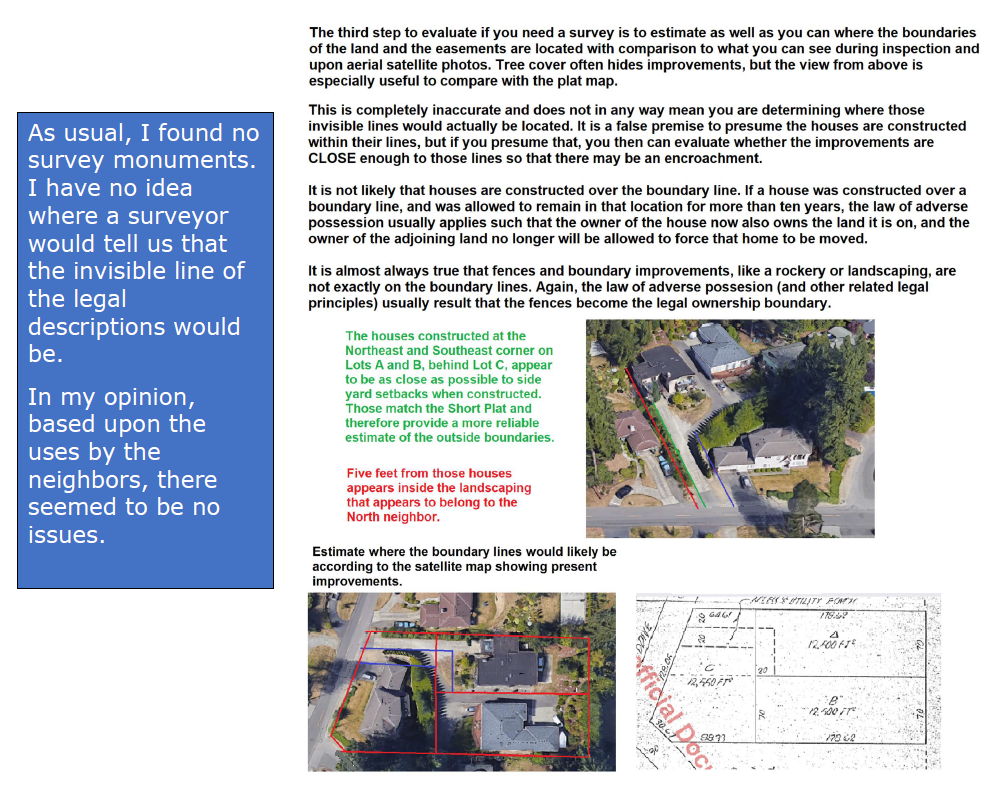 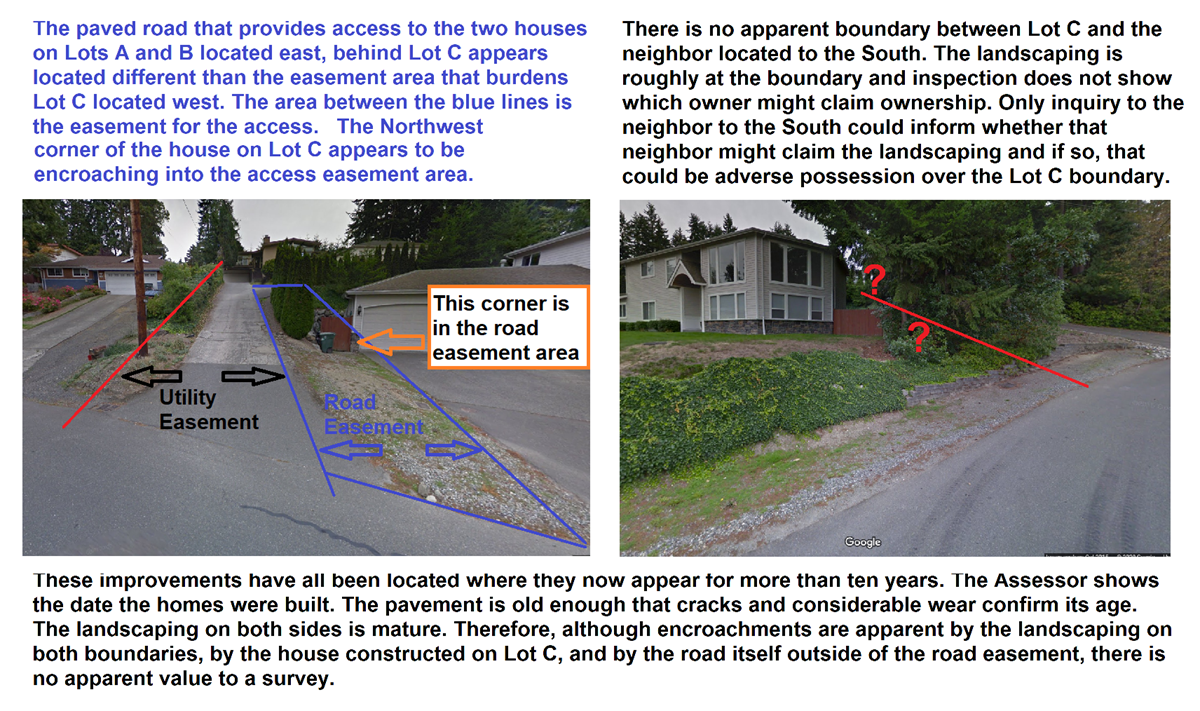 The principles of adverse possession are extremely important when you evaluate the results of an inspection. However, there is no substitute for professional real property judgment. It is not possible to know if a Judge in the future boundary dispute will conclude that the prior use of the property by the owner of certain boundary improvements will satisfy all the elements that court decisions generally agree upon.

There are so many appellate court decisions, all with some variance in the facts. The result is that even lawyers familiar with the principles might disagree. Nevertheless, I generally can conclude whether boundary improvements have existed for ten years.

In this particular inspection, I did not know who put in the landscaping. I will not advise people that landscaping represents boundary improvements that entitle the owners on either side to claim adverse possession. This was an example of that.

If the Purchaser needs more certainty, it is always best to simply ask the neighbor. Whose shrubbery is this? Do you know who built the rockery? Where do you think the boundary is located? Generally I do not do that, but I advise Purchasers they should not presume these are on their side of the line, and ask if they would care.

Looking at the neighbor’s road, I concluded that the portion of the road that was upon the land being inspected had been there long enough that the owner would not expect to obtain court enforcement to move the road. The users of that road either had a prescriptive easement or perhaps had established ownership by adverse possession.

The likely encroachment of the house onto the area for the road easement is not likely to be a serious title problem. The road was located elsewhere, apparently abandoning the stated easement area.

The owner of that house would be entitled to adverse possession ownership where the house is located, and a reasonable setback too. But even if the house had been built within ten years, the easement user would not be entitled to force the house to be moved. Courts would require the owner to pay damages, but would not require the huge cost of moving the house.

Lastly, and always important in my advice whether a survey is needed, is whether title insurance will protect against loss to the owner. Covered Risk 23 of the Homeowner’s Policy, quoted earlier, provides specific coverage, and its coverage is not limited. Only a specific exception in Schedule B specifying the possible house encroachment would avoid that coverage. I don’t know that house is encroaching. I would not advise the potential Purchaser to disclose the issue to the title company.

What would a survey accomplish in this example?

The bottom line determination for a Purchaser is whether they accept these unknowns with the limited coverage available from the title insurance policy. I ask them, “if it turns out that your legal boundary is ten feet on the other side of the neighbor’s fence, would you care if that neighbor is entitled to adverse possession ownership?” Similarly, if it turns out that your boundary is ten feet on your side, and your neighbor forces you to move it, how would that affect your future use of the land? The title insurance will require a $2500 deductible, and will only pay $5000 maximum.”

All of the issues that I found would not entitle a Purchaser to cancel an existing Purchase and Sale Agreement. The Seller is obligated to provide “marketable title.” The agreement states “The following shall not cause the title to be unmarketable: … easements and encroachments, not materially affecting the value of or unduly interfering with Buyer’s reasonable use of the Property.”

There can be a way to get professional assistance from a surveyor without the huge cost of a full survey. A full survey sufficient for a title insurance company to provide extended coverage is $2000 minimum. The surveyor must establish monuments and make a drawing showing the location of all improvements and easements. I have never witnessed a seller paying for that. If you change the request, asking the surveyor to rely upon local monuments and simply stake the most likely, that is much less work, less liability for the surveyor, and less expensive. The surveyor still cannot tell you where the legal ownership boundaries are located.

** DISCLAIMER:  No person should rely upon a blog article as legal advice applicable to their particular circumstances.  Dwight is not acting as the attorney for anyone and no attorney-client relationship exists.  This is only to provide general education about the principles and typical practices within the local the real estate industry.  **